The Example Parks listed below were the subjects of an aerial infrared (IR) deer count flight on the dates noted. The IR imaging conditions were good to excellent during both nights. Additional details can be found in the analysis notes below.

This report package includes this written report, VHS videotapes of the raw infrared imagery of the count areas, map printouts of the deer count and dispersion within and near the count areas and a copy of each map in .jpeg format on CD-ROM. Deer, possible deer and domestic animals are noted on the maps by dots of different colors. Deer are red, possibles are gray or yellow and domestic animals such as horses or cattle are dark blue. The dots representing animals cover an area approximately 30 to 40 feet in diameter on the maps so they can be seen and printed easily.

The aerial infrared imaging flight for Example Park 1 was conducted between 2248 on 26 December and 0045, 27 December 2001. Imaging conditions were good. Surface winds were from 220 degrees at seven miles per hour, with winds at the imaging altitude of 1500 feet above ground level (AGL) from 250 degrees at ~15 mph. The ground was covered with 2-4 inches of snow that was about two days old. Average air temperature was –7 deg. C. The cloud ceiling was broken at 9000 feet AGL, with two scattered layers below. A very light snow was falling during portions of the flight and there was light to moderate turbulence from beginning to end.

The infrared imaging flight of Example Park 2 was conducted between 2255 on 31 December and 0128, 1 January 2002. Imaging conditions were excellent and small animals were easily visible on the ground and in the trees. Surface winds were initially from 210 degrees at five miles per hour, later changing to 200 at 10 mph. Winds at the imaging altitude of 1500 feet AGL were WSW at about 10 mph. The ground was covered with a few inches of snow that fairly fresh. Average air temperature was –9 deg. C. The sky condition was clear with no turbulence.

This example count was accomplished with a single-engine airplane and using a high-resolution thermal imager oriented ‘looking’ straight down through a camera hole in the belly of the airplane. The counts were flown at an average altitude of 1500 feet above ground level with the camera view directly below the airplane. After the flight, we analyzed the videotape using a TV monitor and a computer.

To count the deer, we watch the entire tape, pausing and playing it backward and forward at regular speed and in slow motion, as necessary. Generally, for each hour of tape, three or more hours of analysis and reporting are required to complete the count. As we view the tape and note the deer, we mark each one as a dot on a computer version of the maps accompanying this report. When we have viewed the entire tape, we count the dots on the map to find the number of deer in the count area. If we note large domestic animals on the computer map, we mark them with a different color dot. In these counts, red dots denote deer, gray or yellow dots (if any) denote possible deer or other unknown animal similar in size to a deer but apparently not a deer and blue dots (if any) represent domestic animals such as cattle, sheep or horses. These animals are always much warmer and in the case of horses and cattle, substantially larger than any deer.

Deer usually appear as a fairly bright white dot or narrow line (similar to a grain of rice) in the infrared imagery. In this imagery, white and lighter shades of gray represents warmer objects while black and darker shades of gray are cooler. Other white (warmest in the scene) objects that are common are roads and pavement that retain latent heat from sunshine during the day, man hole covers, street lights, house lights, fires, furnace stacks on houses, car engines that are running or have run recently, groundwater seepages, puddles, ponds, streams, rivers and large rocks and boulders in the woods. Other animals in the picture are often white or bright. Domestic animals are commonly very bright – hotter than deer, which have highly insulating coats.

Questions we are commonly asked and the answers given include the following:

How do you know you are not counting the same deer twice?

With the help of a mapping program, we can place dots representing deer on a map in their respective positions and orientation to one another quite accurately, particularly when referring to the nearby streets, intersections, rivers and streams that may be in view or recently in view on the videotape. As we analyze the tape, becoming quite familiar with the ‘neighborhood’ of the count area (houses, roads, hills, streams, rivers, golf courses, trails, etc.) and place the dots on the map, we recognize specific deer and groups of deer as we pass them a second and sometimes third time. For example, we may see and place a group of three deer/dots in an equilateral triangle near a trail a few seconds after passing a particular road. In the case where we first saw them they may have been on the right side of the screen. When we fly the next adjacent run, thanks to overlapping imagery, they may appear on the extreme left side of the screen. Very often, they will be in the same spot or not far from it, in the same or similar ‘formation’ five, ten, fifteen or even thirty minutes later. If we fly along and see a lone deer in the forest, it will still be there in the same general area when we make adjacent passes. On occasion, we will fly over a group of deer in an area, and on subsequent passes, we will see an additional deer that we did not see earlier because it may have been out of the picture, too close to another deer (appearing larger than normal – but not counted as two) or it may have been obscured by a tree or foliage on the first pass. In those cases, we add the dot to the map. In uncommon cases where deer are moving quickly, we will look for them elsewhere in the direction they were originally seen moving. If we later see deer in the vicinity and cannot recognize them as the same group, we have to make a judgment whether to count them or not.

Experience, practice and experiments counting and identifying a variety of captive animal types have given us high confidence in identifying deer in their normal forest, rural and suburban habitats. The deer that we have difficulty identifying and counting are those that are partially hidden from view in evergreen vegetation or exhibit such a low apparent temperature (thermal signature) that we cannot see them or distinguish them sufficiently enough to identify them as deer, or even as animals. We do not count ‘white dots or blobs’ that we do not have a strong feeling are deer. This includes deer bedding areas in light snow cover that contain melted through areas to the ground that approximate deer thermal signatures. Close examination of most infrared deer count videotapes will reveal to the viewer quite a few animals in trees or on the ground that do not appear on the deer count map. These animals are most likely to be something other than deer. Our deer counts are generally considered a minimum definite number – as opposed to a maximum, possible number. Some deer will go undetected in nearly every environment.
How do you know what you are seeing and counting are deer, not some other animal?
How accurate is the count?

We don’t know, but believe an average of 90% is in the ballpark, perhaps better, sometimes worse. Conventional methods (deer-car collisions, spotlighting, pellet counts, deer tracks) are considered to be accurate within 30 to 40 percent – not a high number. In this method, we are looking at 100% of the area in question and under good conditions all active deer not hidden from view should be seen and counted with infrared. 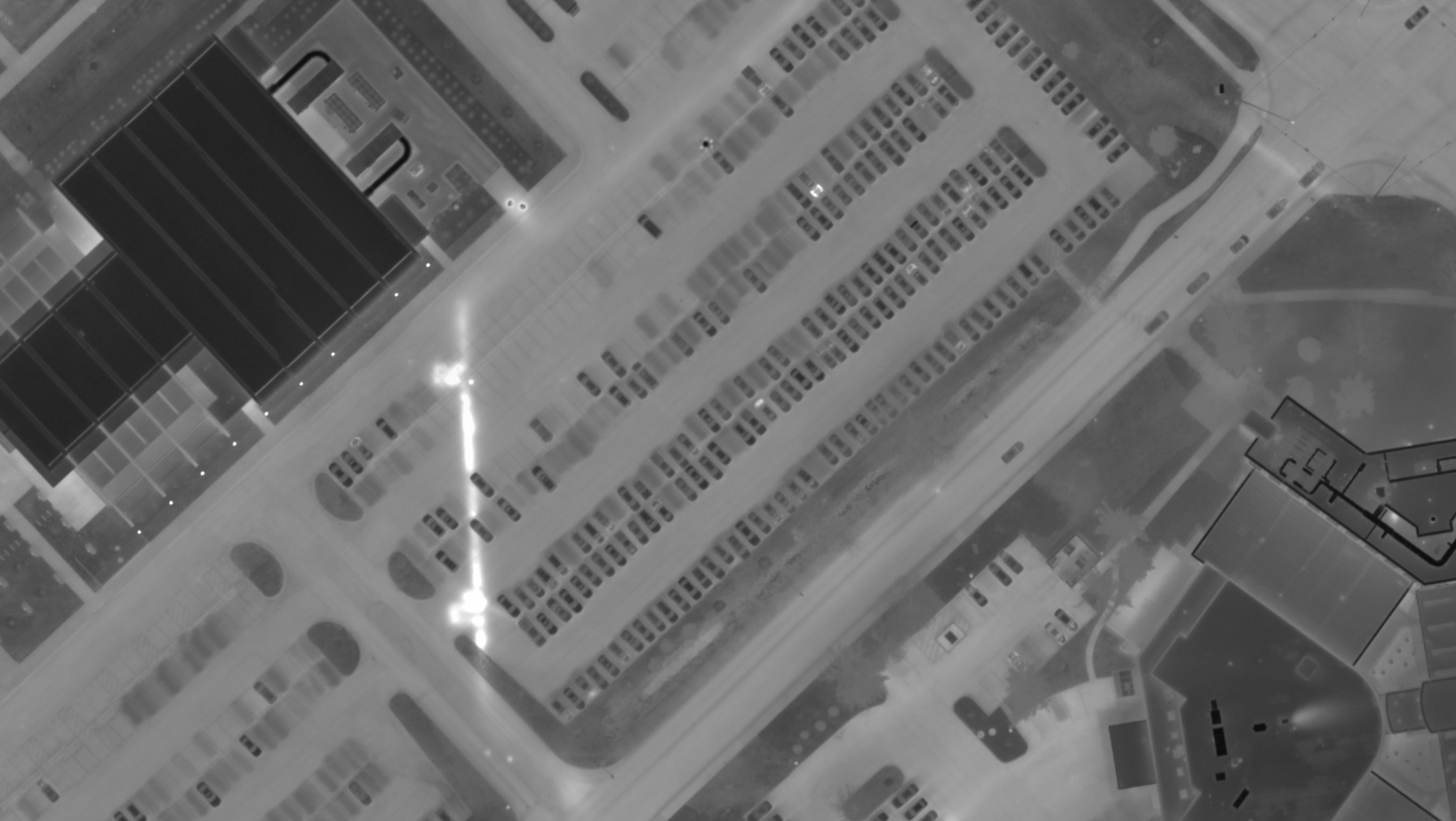 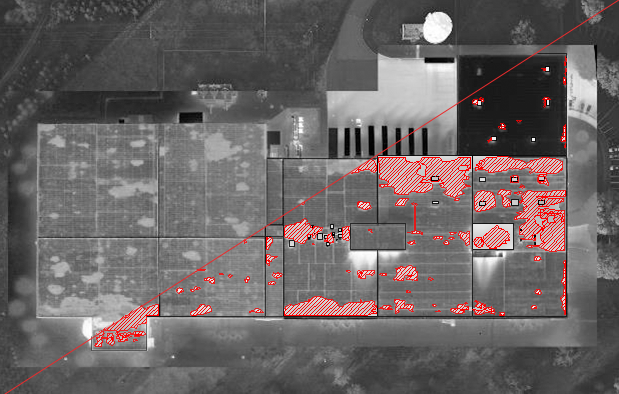 Reference list of our clients whose names you will recognize